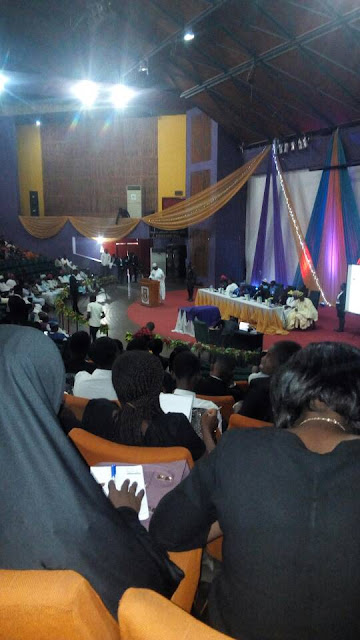 Oba Abdul Rasheed Akanbi has today said that the problem Nigerians are facing, especially youths is the thinking and philosophy we inherited from our fathers. He disclosed this In a program organised by the Law Students' Representative Council(LSRC) today at Oduduwa Hall, OAU.

While rendering his speech on the topic 'Building and Sustaining Viable Youth for the Society', the Oluwo of Iwo land kept the youths present on their toes by feeding them with his thoughtful speech. He stated that the prime problem Nigeria is facing is genocidal corruption which is a killer, as our leaders are also an element in appetising and whetting it's flame.
"I am ready to change the retrogressive path in our society as poverty and corruption has eaten us whole which we need to sermon our leaders to make Nigeria a corruption free nation nation..."

The King, who challenged the youth to seek for transfer of technology as their huge percentage in Nigerian population is a blessing and shouldn't be a curse. He pointed out the newly established factory in Aba where cars are been produced. He further urged the Nigerian leaders to procure and prioritise Nigerian made products as our economy is dwindling and dangling in the state of wreck.
He said that youths should shove any culture making humans their appropriation in sacrifice making to gods, as humans are the provider for gods and we are the god of gods and humans will always be a pawn in the chess game of their beliefs.

In his speech, the National Youth Leader, KOWA Party, Jude Feranmi challenged youths on what they are doing to make Nigeria a great nation and their input to Nigerian systems. He said that despite the large ratio Nigerian youths take in the Nigerian population, Nigeria still suffers lack of innovation and 21st century development. He enjoined youths and students to develop the habit of thinking great and always have in mind that they are not the leaders of tomorrow but of today
"Nigerian youths puts their believe in the common saying that children are the leaders of tomorrow, let's stand on the stance that we the leaders of today as the old saying is one of the reasons why our leaders today tend to sit tight and believe tomorrow will always be tomorrow".
He finalised his speech by saying that today's youths are not a lost generation as they can do the right thing to make the country great and a place worth living in.

Engr Yusuf Sanni the chairman of ADP while speaking on the topic 'MULTI-PARTY SYSTEM AND VIRILE OPPOSITION: CATALYST FOR DEMOCRATIC DEVELOPMENT', stated that political parties emerged late after the 2nd world war which has eventuated to a direct effect on Nigerian democracy and has shown that Nigeria is a worthwhile playing ground for true democratic settings.
He charged today's youth to shun the music of political apathy and use their full prowess and strength to build political parties that will project Nigeria's image in a good political form. He applauded the Law Students' Representative Council for organizing the program and enjoined other campus association to emulate the same to have an impact in making a better political future for today's youth.