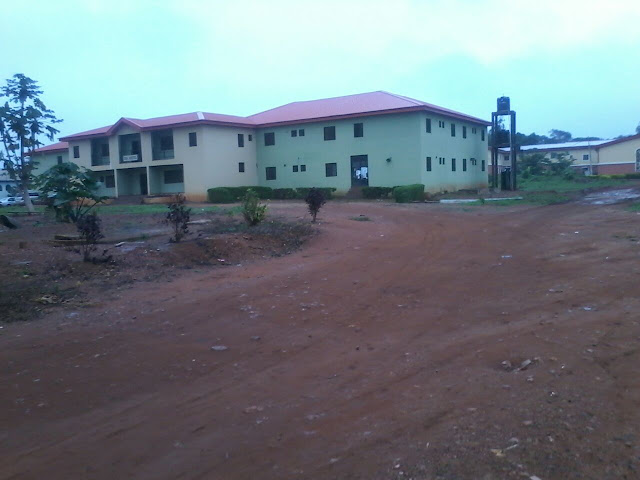 Campus journalists in Obafemi Awolowo University, under the aegis of the Association of Campus Journalists (ACJ) has called on the university authorities to immediately intervene in the worsening state of the private hostel on campus, Maintenance Hall despite the continual increase in rent cost.

In a statement signed by the association's President, Okeowo Olasunkanmi; the General Secretary, Seun Ibrahim and the Public Relations Officer, Oye Ola Oladimeji, the body noted that its call is based on the "outcry of the occupants of the hall over the horrible state of the pocket-tearing hostels."

"Following the outcry of the occupants of maintenance hostels about the horrible state of the pocket-tearing hostels which are owned by the management and private individuals and in a bid to find a lasting solution to the inhumane treatment, some occupants of the hostel have deem it fit to relay their horrendous experience with ACJ's representatives. A few number of them narrated their ordeals anonymously because of the fear of victimization by the caretakers of the hostel. An occupants of De Gold hostel has this to say "despite the incessant increment in the hostel fee, that's from N75,000 to N95,000 and now N105,000, though its two persons in a room, there is no maintenance, our fans are not working since we packed in, The WC toilets are not working perfectly, The net has been torn which gives room for mosquitoes of different types into the room".

Another occupant from the same hostel also narrated her experience; "my room is not tiled, The building materials use are substandard, The roofs leak and despite meeting with the owner about the state of the hostel there is no development".

The sorry state of the hostel is not peculiar to De Gold hostel alone, as occupants of the Bver hostel also revealed the state of their "block" ; 'I stay in 3-man's room, not a big room though, there was no dustbin to dump refuse for a month, pumping machine is not working and there is no action about it, even after series of consultation with the management of the hostel.

Another occupant from Bver hostel says ; "the hostel fee which was initially N75,000 is now N85,000 yet there is no maintenance, The bed is bad to the extent that a laptop was destroyed, though N10,000 was given after we lodged complaints , but the owner later spent additional N15,000 to repair it and up till now, no measure has been taken to avoid such scenario from repeating itself. The table meant for reading and dinning is not in a good state, toilets pipe has broken which makes the place to be polluted, lastly we've been warned to pay before resumption hence we will meet our loads out of the hostel when we resume from the end of the year break".

Stella Odeyemi Hostel is not left out in this mess, as occupants also expressed their displeasure over the negligence of the caretakers. One of the occupants has this to say; "there is no constant water in our hostel, we paid N120,000 last year, and now it's N140,000, but unfortunately there is no maintenance. Out of the four tanks of water we have only one is functioning, and the functioning one can't serve the whole hostel, and the ugly part of it is that the water is dirty and based on the information flying around the rent fee may be increased to N160,000, The caretaker hinges the blame on money charged by electricity distribution company, but this is not a good reason because other hostels are using light as well."

Another occupant from the same hostel also shared her experience thus;" there is no water in the rooms most especially block B for almost a month, sometime the sockets work, but light and fans are not. A room is charged N320,000, and the two occupants are to share the bill, and once they realise you have graduated they send you packing even when your rent is not due."

Another occupant also revealed to our correspondent about what she is passing through in the hostel;" there are scorpions in our rooms, and we are being denied access to the owner of the hostel. Construction of Another building is going on in our hostel, and the workers who are mostly male are always passing their night in the same hostel with us instead of them to be given an apartment to pass night outside the hostel that is basically for female students, we used to be disturbed by their noise in the midnight and we are not free to work anyhow as ladies because of the fear of having opposite sex passing night in the same hostel with us." she said. After much investigation to this inhumane issue, we seek a lasting solution through our:

RECOMMENDATIONS
- That the open market used by the hostel owners be regulated by the management.

- That the management should send a notification letter to all hostels stating that all decisions earlier made should be pending, till after the meeting in which the decisions would be in accordance with the resolution of the meeting.

- That the meeting should have in attendance hostel owners, student representatives from each hostels and head workers for each hostel

- All decisions made at the meeting should also be binding on all hostels, while disciplinary measure should be taken on owners who refuses to attend the meeting and comply with the resolution of the meeting."