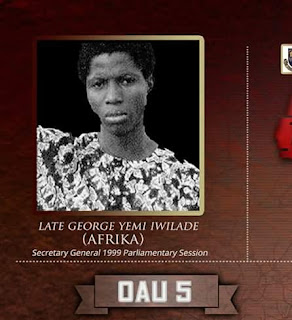 On the night of 9 July 1999, the _Kegites,_ members of the Palm Wine Drinkers’ Club, held a “gyration”
(party) in the Cafeteria of Awolowo Hall. The party was in full swing, when, at around 3:30am (now 10 July), a group of masked individuals, wearing black clothing, drove through the main gate and proceeded to the car park next to the Tennis Courts in the Sports Centre. They went on foot along a bush path to Awolowo Hall, where they violently interrupted the gyration, firing guns and also wielding axes and cutlasses. Some of the partygoers were shot, though none of them were killed. Charles Ita and five
others who were shot in Awo Hall Cafeteria survived.

Twenty-five others received minor injuries, which were sustained during the stampede during the attack. Tunde Oke (Part 1, Philosophy) was still alive but died on the operating table. Yemi Ajiteru (Part 2, Religious Studies), Efe Ekede (Part 2, Pscychology) and Eviano Ekelemu (a medical student) bled to death due to gunshots fired from close range. The suspended Students’ Union President, Lanre Adeleke (Legacy) escaped when he had the first gun shots. He broke through the partition of the kitchenette into the next room’s kitchenette.

George Iwilade (Afrika), the Secretary-General of the Students’ Union and a Law student was shot in the
head. In 7 March 1999, He was reported to have led a confrontation of the Black Axe members who were caught in the boy’s quarters in the Senior Staff Quarters officially occupied Mr. F.M. Mekoma. They found nine individuals, eight of which were OAU students.
They were arrested and handed over to the
police. Barely 2 weeks they were granted bail, that the University authorities suspended them. Soon after the murders, the students brought a proposal that the Oduduwa Hall amphitheatre
be named the “Afrika Theatre” after George Iwilade. The proposal was rejected by the University
Senate.

In the aftermath of the attack, the students went to the town searching for the perpetrators in locations where cult members were thought to be living. They “arrested” three individuals and brought them back to Awo Hall for interrogation and torture. Two of which died in the course of the interrogation. During two different Congresses, one of the attackers made his statements concerning the involvement of the VC, Prof. Wale Omole. The interrogations also yielded the information that the 22 Black Axe members from OAU, UNILAG, UI, UNICAL and UNIBEN were involved.

Following the resolution of that congress, the principal officers of the university were declared wanted. Students attacked the residence of Prof. Femi Ajibola (DVC, Administration), Prof. A.E. Akingbohungbe (DVC, Academics) and Prof. D.O. Kolawole (DSA). This made them go into hiding with their families. The VC had been out of the country on 10 July 1999. He returned from his trip to the campus the night after the tragedy and this must have exacerbated the suspicion which the students had about him. The VC’s wife, Sade Omole was kidnapped by students on her way from a church service in Ife campus in the afternoon of Wednesday 14 July and she was held for two hours before being released. That same day, the Government announced the suspension of Prof, Wale Omole after he had been summoned.

On the evening of 26 July 1999, a funeral service was held in Amphi Theatre after which four of the murdered students were laid to rest in the University Cemetery while “Afika” was buried in Iwo, his hometown amidst a great wave of grief. The tragic event attracted the attention of CNN and a visit of the then Minister of Education, Prof. Tunde Adeniran.

Following the proceedings of the Judicial Commission of Enquiry, a total of 12 individuals were arrested and charged to court over the three weeks following the murder. Only one of those involved in the March episode was among those arrested. There was adjournment after adjournment. Though nothing
eventually came out of it. Prof. Wale Omole presented a two-hour evidence before the Commission. Barely, had he finished, that he was smuggled to his car with a mob of stick wielding student pursuing
him. To the amazement of everyone, on 5th November, 2002. The Judge upheld a “No Case” submission by the defence. The accused persons were released and they subsequently disappeared.

Prof. Roger Makanjuola who succeeded Prof. Wale Omole wrote in his book titled; Water Must Flow Uphill, _“The student body is the major factor in the success of any campaign against secret cults"._