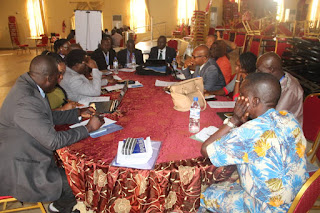 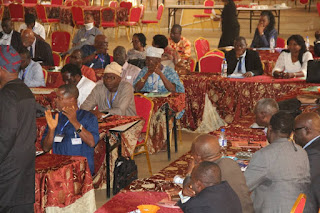 The Chairman of the Governing Council of the Obafemi Awolowo University, Ile- Ife, Dr. Yemi Ogunbiyi, has charged all categories of staff to do everything within their power to ensure that the glory of the University is restored and make it   even more glorious so that the dreams of the founding fathers  in establishing the University in the first place would not be distorted.


Dr. Ogunbiyi gave the charge at a three – day retreat organized by the Governing Council for all the Principal Officers, Provosts of Colleges, Dean of Faculties, Heads of the Departments and Units, Union Leaders and other stakeholders in the University. He stated that though there were many problems confronting the University, none should remain insurmountable given the caliber of intellectuals in different departments domiciled within the University.

A release by the Public Relations Officer of the University, Mr. Abiodun Olarewaju, stated that Dr. Ogunbiyi frowned at the current system in operation in the University which makes documents that could be treated with dispatch to be unnecessarily delayed, stopping at so many tables, thereby frustrating their intended purposes; or a situation where the Vice-Chancellor is unnecessarily over-burdened by being made to attend to every document. He wondered how the Vice-Chancellor would find time to attend to other pressing matters, particularly the aspect of fund-raising. The Chairman, thereafter, counseled the Bursary, Registry, Audit and all other necessary departments and units of the University to do a mini retreat for their staff and impart them with the outcome of the main retreat so that the entire University system would be running smoothly

Going down memory lane, he highlighted different achievements which made then University of  Ife, (now Obafemi Awolowo University) the  cynosure of all eyes as the Centre of Excellence to include  the numerous academic laurels won by staff and students in competitions within and outside the country, spectacular breakthrough in researches in virtually all faculties, medals won in both Local and International Sports competitions and other forms of attraction particularly the horticultural excellence of the landscape and architectural  masterpiece of the buildings; urging the crop of the current staff not only to maintain the standard but to also build on its  enduring legacies.

The Council Chairman, then, tasked all the participants to come up with suggestions, comments and innovations that would bring about rapid transformations to Obafemi Awolowo University and make it a truly “ Great Ife” in all ramifications.

Welcoming the participants, the Vice Chancellor of the University, Professor Eyitope Ogunbodede, enjoined them to justify the purpose of the retreat by concentrating fully with open mind and putting into practice all that they would learn within the three days, stressing why the retreat was taking place at a resort, in a serene environment, away from academic and administrative distractions of their respective offices.

He appreciated the Chairman of Council and his team for their thoughtfulness in bringing out the idea of the retreat and for believing in the ingenuity of staff to bring about the desired turn around for the overall development of the University.

In a highly incisive, soul-searching and thought-provoking lecture, titled: THE NIGERIAN UNIVERSITY SYSTEM : IN SEARCH OF EXCELLENCE AND GLOBAL RELEVANCE,  a former Vice Chancellor of the University of Ibadan, Professor Olufemi Bamiro, urged Universities to rise up and occupy their pride of place as problem solvers and produce graduates who would intensify researches into finding solutions to myriad of problems confronting the society. According to him: ”A service intensive university, as distinct from the seemingly narrow perception of a world class university, applies and also imbibes in its graduates, research-driven world-class thinking to the analysis and provision of solutions to the socio-economic problems of a nation state, thereby guaranteeing her sustainable development and a place of pride in the comity of nations”.

Professor Bamiro enumerated the expectations of the society from the University and urged its leadership to be up-and-doing in order to justify the confidence reposed in it; advising those in the academic, administrative, and technical organs to devise means and innovations that would make life more meaningful to their immediate environments.

The Professor of Mechanical Engineering, while alluding to a 2017 submission of the Global University Network for Innovation which emphasized that “Universities face a dual and potentially conflicting responsibility to address both the local demands of society based on the race for global competitiveness and local and global demands to contribute to a more equitable and sustainable society at local and global levels”, said OAU should redouble its efforts and compete with other Universities in the quest for pragmatic solutions to the problems bedeviling the Nigerian-nation and the African continent as a whole.

Professor Bamiro, who recalled that OAU had a retreat few years ago with the theme: “Policy Frameworks for Transforming OAU to World-class University status”, commended the University for the conscious efforts made since then in the evolution process, adding that transforming into World-class University is a desire that is gaining currency all over the World now as a measure of excellence in the global intellectual space.

He therefore enjoined all the participants to regard the retreat as the drawing board for charting the plan that will reposition the University on the pedestal to its rightful and leadership place in the comity of World’s renowned Universities.